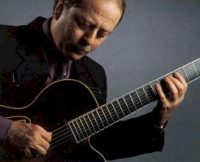 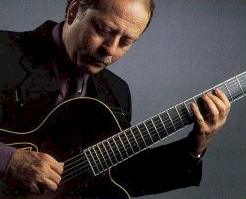 Ron Escheté is originally from Louisiana and grew up playing the Blues, eventually playing in most of the major Blues clubs on New Orleans famous Bourbon Street. Ron studied classical guitar and flute at Loyola University and moved to California in 1970. In 1975 he joined pianist Gene Harris and quickly established his reputation. He has played with all the jazz greats, including Ella Fitzgerald, Diana Krall, Dizzy Gillespie, Milt Jackson, Ray Brown, and Ernestine Anderson and many others.

He is the author of several books on jazz guitar.

Ron is a master of the 7-string guitar and his chords are exquisite, the Bill Evans of the jazz guitar. Because of the seventh string, he sometimes sounds as though two people are playing.

Dr. Herb Wong says of Ron “As a leader, soloist, arranger and accompanist, Ron’s wherewithal is armed with Protean strengths and vitality, enhanced with eloquent harmonic and melodic language.” 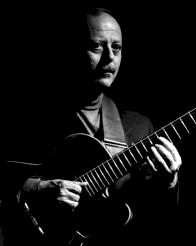 Ron Escheté (pronounced ESH-tay) is the consummate master of the seven-string guitar. Whether he is playing bebop, ballads or blues he is a musically sophisticated guitarist who plays with grace and dignity. “Escheté is one of the finest jazz guitarists in L.A. – no small achievement in a region dense with superb players,” says Jim Ferguson of JazzTimes. His deft and nimble fingers paint a spectrum of sound so rich that his voicings are often compared with those of a pianist. 20th Century Guitar likens his sound to that of the great Bill Evans.

Escheté is currently performing and recording with the Ron Escheté Trio, featuring Todd Johnson on six-string bass and Kendall Kay on drums. While he has long been regarded as one of the finest guitarists in mainstream jazz, now Escheté ranks as an innovative leader for his work with this ensemble. “The Escheté trio is as polished as the classic Modern Jazz Quartet… This is a unit that speaks with a single voice. It is a voice of brilliant musical reason.” – Jim Merod, Jazz News. What is most unique about the sound of this trio is the depth and texture created the coupling of Escheté’s seven strings with Johnson’s six strings. The outcome – “a rich tapestry of melody, harmony and teamwork,” says Hal Howland for Modern Drummer Magazine. 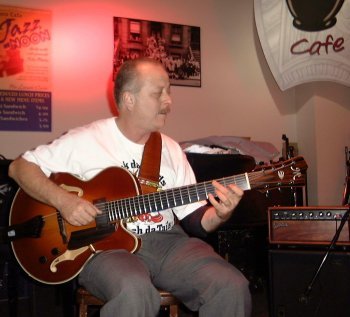 Escheté was born in 1948 in Houma, Louisiana, and not surprisingly his early influences were jazz masters Jim Hall, Howard Roberts and Wes Montgomery. After receiving his first guitar at the age of 14, Escheté joined a quartet and was working clubs in Louisiana before he had even graduated from high school. He attended Loyola University where he majored in classical guitar and minored in flute. While there he studied with classical guitarist Paul Guma.

Shortly after Escheté left Loyola he was tapped to tour with Buddy Greco. While on tour with Greco, Escheté set his sites on the Los Angeles music scene. In 1970 Escheté relocated to California, working and recording with vibist Dave Pike. Then in 1975 he joined forces with pianist Gene Harris and quickly establish his reputation as a premier accompanist. Over the decades Escheté has worked with the greatest artists in jazz including: Ella Fitzgerald; Sarah Vaughn; Diana Krall; Dizzy Gillespie; Milt Jackson; Ray Brown and many more.

Escheté has appeared on the Tonight Show with Diana Krall, the Merv Griffin Show with the Mort Lindsey Orchestra, the Mike Douglas Show with Buddy Greco. He has played nearly every notable jazz venue in the southern California including the Catalina Bar and Grill, The Jazz Bakery, Steamers, Donté’s, Carmelo’s, The Parisian Room and The Lighthouse to name only a few. He has toured extensively and has played major venues from New York to San Francisco.

Escheté cites a 1988 gig in San Diego as a critical turning point in his career. There he began to shed his reputation as the quintessential sideman; he stepped to the center of the stage and he began exploring original material. “Long considered to be one of the finest guitarists in mainstream jazz musicians and listeners alike, he has now taken over the reins, and “innovative leader” might be a better appellation,” says preeminent jazz critic, Zan Stewart. In 1994 he released his first solo recording for Concord entitled, A Closer Look (CCD-4607), showcasing his masterful fingerstyle sound and his seven-string Benedetto arch-top. In addition to this solo recording Escheté has recorded three CDs with his trio (Softwinds, CCD-4737; Rain Or Shine, CCD-4665; and Mo’ Strings Attached, TJA-10020) and is currently working on a 4th recording to be titled Live at Rocco.

Ron Escheté has been described as a masterful musical chameleon, switching melodic lines and ideas with cool efficiency and beauty. He transforms from accompanist to soloist to band-leader; from musical master to musical mentor.

…Escheté is one of the best there is at playing the “traditional” melodic jazz guitar style; a keeper of the flame. – Adrian Ingram, Just Jazz Guitar